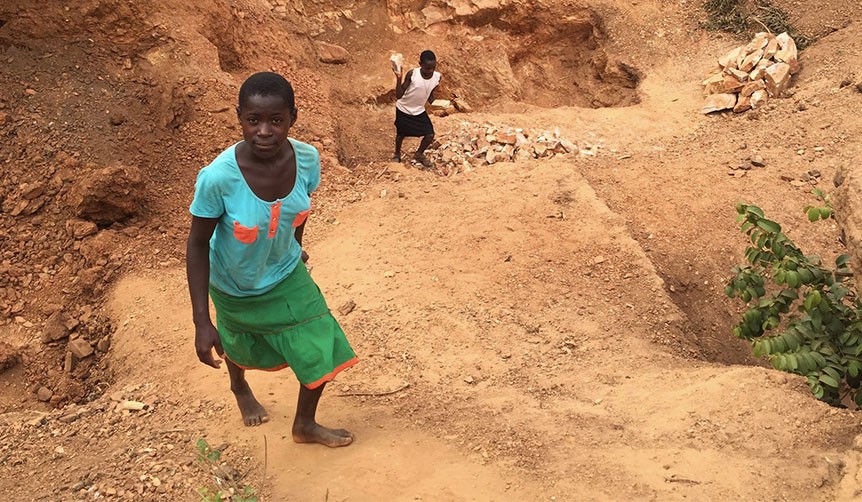 The words strike at the heart of everyone who hears them and have such an insidious connotation. To us, they indicate self-righteousness, slavery, and an absolute lack of value of human life. But when you hear the words come out of a mother’s mouth about her own children it takes it to a new dimension.

Veronica is a 51 year old single mother who has raised and supported her 9 children on her own, all but three of whom have passed away or are grown. The three children remaining are little girls ages 12, 14, and 15 named Sylvia, Rose, and Gloria.

Veronica dreams of having her own piggery. With 10 pigs she would earn $1800 per year which is five times the $1 per day she and the majority of northern Ugandans struggle to earn. This would be enough to provide for all of her family’s basic needs and would pay the girls’ school fees with capital left over to be reinvested in growing her business. But her poverty is so great, starting a piggery is an impossibility.

Instead, each morning Veronica and her three girls walk two hours to a rock quarry to chisel rocks out of a deep mine and smash them into smaller rocks. They remove the rocks from the 30 foot-deep mine by carrying a 20 liter bucket filled with rocks to the surface up a steep and rocky slope. For perspective, when they haul 20 liters of water from the well it weighs about 45 pounds. You can imagine 20 liters of rocks weighs at least twice that.  They do this from morning until evening, then they walk two hours home. 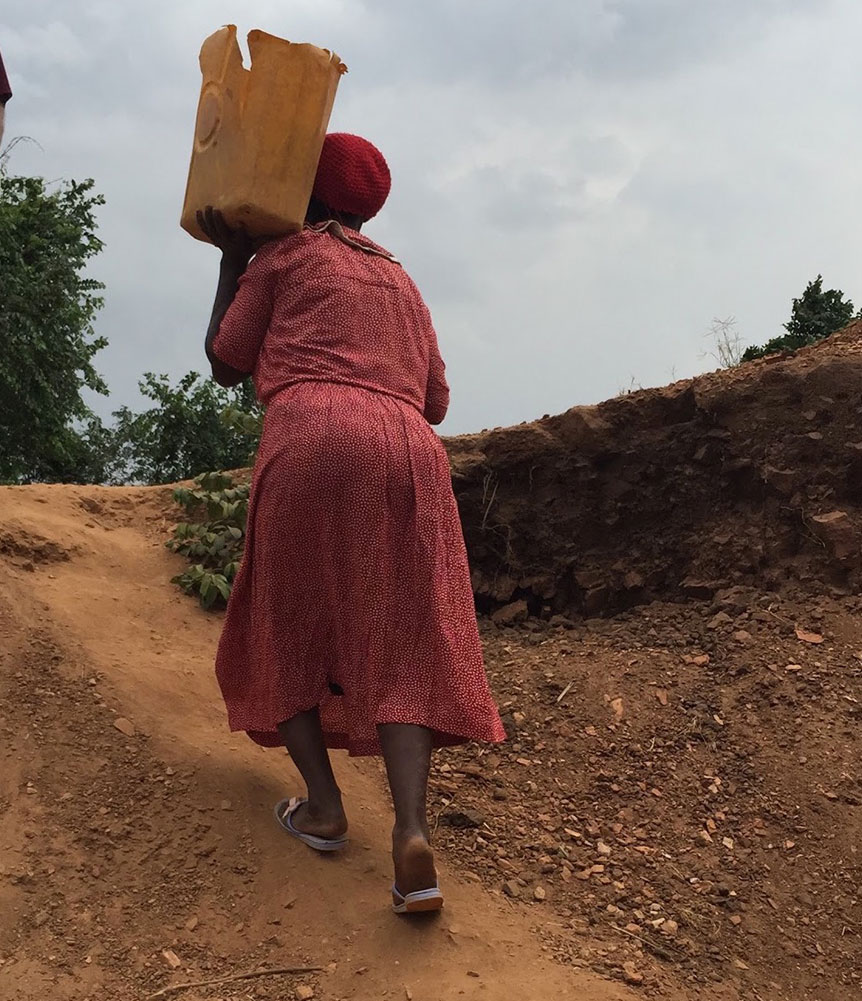 If I’m going to advocate for a vulnerable person, and ask you for your financial support to change their life, it’s important that I experience what they experience as much as I can. So in my long skirt and bare feet, I descended into the deep mine and began to fill a bucket.

I will never forget how difficult it was to heave the flimsy 100 pound bucket to my shoulder, much less maintain my balance.

Even more difficult was to make the two and a half foot step up onto the ramp with one leg. Imagine a one leg squat with a 100 pound weight off centered and that begins to come close to what this was like. Of course, add the hot 95 degree African sun and no reliable food or water and you come closer to what it’s like for Veronica and her three girls, who also carry rocks. Because of the rocky soil customary to Uganda, walking up the 30 foot rise was very difficult in general; now it was time to do it barefoot while balancing the bucket of rocks.

I made it, but only just barely and I had the watchful hand of Veronica spotting me the entire way. Exhausted, I turned to Veronica and told her no child should live this way, she should not live this way. Veronica sighed and explained this was their only option to survive, and that it was child labor.

Veronica and her girls carry 100 buckets per day. It takes 600 buckets to break even with expenses. Every additional 100 buckets will yield $15. Do the math – 700 buckets means $0.02 per bucket. My God; typing that just made me cry. 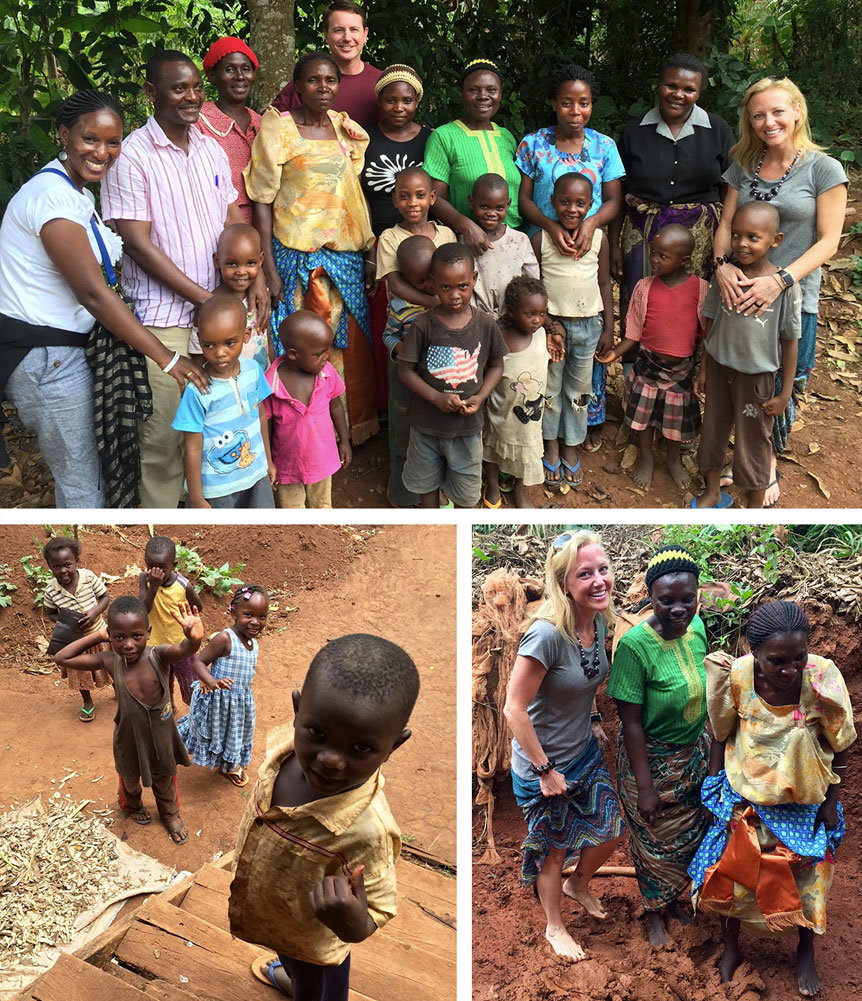 This week I’m hearing story after story of mothers and children working desperately hard to survive.

Working in the most impoverished communities — those most heavily hit by the war and HIV/AIDS — we’re implementing income generating and self-sustaining projects so entire communities are freed from the slavery of abject poverty, hopelessness, and the necessity to rely on child labor. The average budget for a cooperative project that will benefit groups of up to 30 families is $1000, which includes business, finance, and vocational training, and of course start up capital.

Will you pray for these communities and if you feel so led, consider making a financial gift to the effort? This week we’re implementing eight projects and our goal is to implement 10 more by June. Approximately $35 equips a family to be self-sufficient, $1000 establishes cooperative businesses among 30 families, and $10,000 frees up to 300 families from the chains of poverty.  It’s a small investment that will tell mothers and children they matter to God and they matter to us, and that they’re deeply valued and desperately loved.