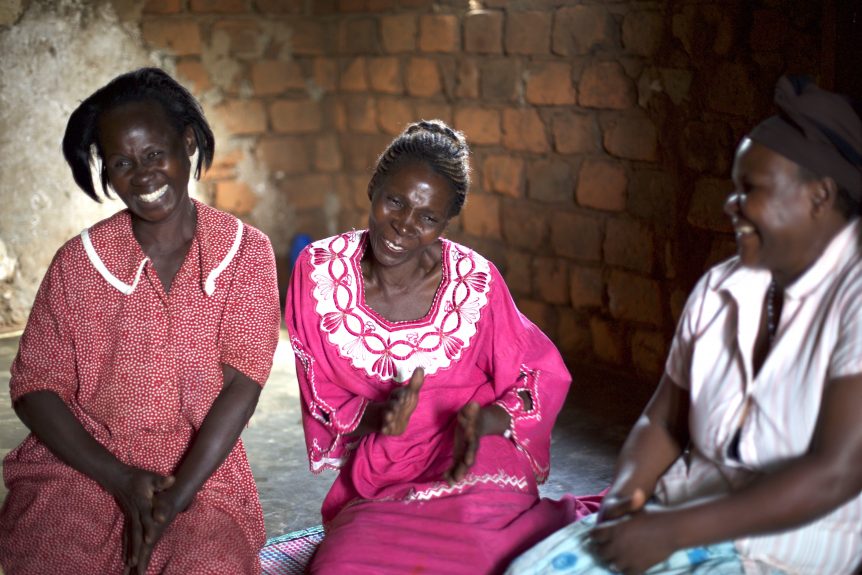 I love Veronica’s story because it was the story that brought what we’re doing in Uganda to life. Four months ago, I kicked off my shoes and, in a long skirt and bare feet, hauled a 100 pound bucket of rocks up a steep embankment out of a quarry. It was difficult, but I needed to know what it was like for my friend Veronica to carry 100 of these buckets a day, to earn $0.02 per bucket. Rather than attend school, Veronica’s three youngest children, ages 12, 14, and 15, carried buckets with her. Her story resonated with so many, and showed us all that we can do better than this.

Recently, I spent the morning with Veronica to be updated on how the cooperative business we helped her start was progressing. She and six other women were eager to be trained for our business development program, and when they were ready, they received startup capital to create a piggery. We intended for the co-op to use the money to buy several piglets, but they instead bought three piglets and one pregnant sow. They had the foresight to invest a bit more in something with a more immediate return. This decision reinforced my belief that these folks know what they’re doing, and their input is critical. The pigs looked great and had clearly become part of the family to these seven women who proudly adored what they had begun.

Veronica talked with me about her HIV+ status and how the hard labor of working in the quarry was so difficult for her that she felt she would die. She shared that she had never had joy in her life, and she lamented that she did not want this future to be that of her 9 children. That prompted a question I’d never thought to ask up to this point. I asked Veronica to tell me about her childhood.

“My childhood was really a mess”

Veronica’s mother passed away when she was an infant, leaving her with her alcoholic father. She remembered how, when she was 5 years old, he used to lock her out of the house when he would go drink. If he saw that someone had stopped to help Veronica, he would instead lock her inside the house without food, and go back to drinking for hours. By the time she was 7, the authorities confronted her father about how he was treating her. From that, he beat her badly and threw her out of the house. One day, her father left to drink and just never returned. Veronica found herself on the street finding community in the other street children.

“When it rained, we were the kids who used to swim in the street”

Life did not improve for Veronica when she got married. Her first husband died of HIV/AIDS and her next abused her. Veronica was left, alone and without an education. She could only do the most labor-intensive jobs for meager pay, and struggled to provide for her 10 children.

When we met Veronica, she was living in abject poverty, without joy or hope. Now she has the support and fellowship of her piggery co-op, and a vision for the future for herself and her children. “Because of this project and working as a team, I feel my life has been changed. Not only mine, but also my children’s lives. I have hope.”

In that moment, I saw that if you want to change the life of today’s orphan, you have to begin with yesterday’s.

Poverty begets poverty. Here, it often begins with an orphaned or abandoned childhood and is solidified by a lack of education and opportunity. These children grow to be the next generation of adults, also unable to care for their children. And so the cycle continues.

God does not desire for us to merely help the orphan with help is temporary and fleeting. He has entrusted these children to the mothers and caretakers within their lives. He knows they are strong and capable of raising His children. They simply lack the resources to do so. God desires for those women to change the lives of their children, and He’s called us to stand behind them, and to give them the opportunity to do so.

Since our first assessment of Veronica’s economic development plan, we’ve learned that because animal husbandry projects take time to show a return, it’s necessary to add a village savings and loan component. From that, these women can start independent small-scale businesses with immediate revenue while the larger, cooperative businesses — which provide sustainable revenue — develop.

Every person we spoke with that week remarked on how we had come back; that we had not left them. They implored that we return as well. I assured them we would, that we were committed to them and would continue to walk along side them as they change the life of a child.